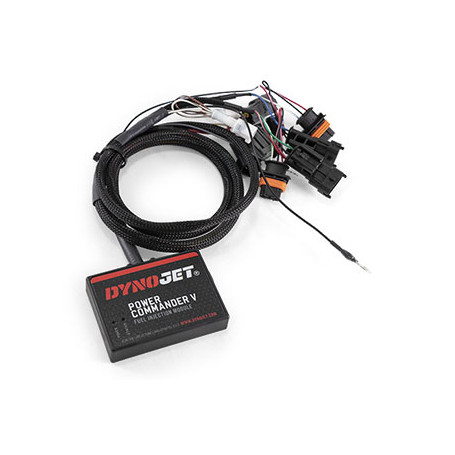 local_shipping Shipping ALL OVER THE WORD FAST SHIPPING.

The New Power Commander V is loaded with tons of new features. It is compatible with 2009 and newer bike models. Below you will find some Power Commander V features. * Reduced size from PCIIIusb (less than half of the size of PCIII) * USB powered from computer (9 volt adapter is no longer needed for programming) * 2 position map switching function built in (map switch not included) * Gear input (allows for map adjustment based on gear and speed) * Analog input (allows user to install any 0-5 volt sensor and build an adjustment table based on its input such as boost or temperature) * With gear position input connected the PCV is capable of allowing each cylinder to be mapped individually and for each gear (for example: on a 4 cylinder bike with a six speed transmission there could be up to 24 separate fuel tables). * Unit has a -100/+250% fuel change range (up from -100/+100%). This allows more adjustment range for 8 injector sportbikes * 10 throttle position columns (up from 9 on PCIIIusb) * Enhanced “accel pump” utility (increased adjustment and sensitivity ranges) Compatible with: - Kawasaki: Ninja 250R_M
Dynojet

Send us your question

Be the first to ask a question about this product!

This site uses cookies. By continuing to browse the site you are agreeing to our use of cookies. Find out more here.